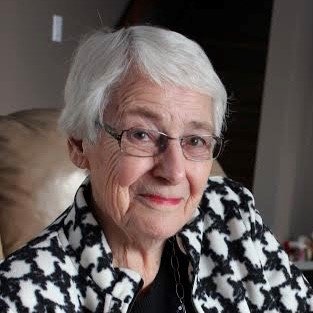 Doreen was predeceased by her mother and father Edwin or Eddy and Hazel Fossen, her first husband and love of her life, Dallas Ray Bowersock, her second husband Ev Oberg, brother Keith Fossen, her and uncle Bud and aunt Irene Tull, in-laws Les and Myrid Bowersock, Bill and Jean Bowersock, nephew Donald Bowersock, and many other relatives and friends. Doreen's Family: Judy (Don) Melnyk ~Jared (Leanne) Melnyk ~~ Max Melnyk ~Dallas (Quintin) Wood ~~ Gabrielle and Oliver Wood Linda (Lynn) Ponto ~ Nicholas (Linette) Ponto ~~Carter, Jase and Oakley ~Mathew (Bridgette) Ponto ~~Brilyn and Caelum Ponto ~Sidney (Nolan) Dixon ~~Hazel Dixon Ed (Gayle) Bowersock ~Shanley Bowersock and Brad Beck ~~McKenzie and Corbyn Beck ~Barrett Bowersock Pallbearers - Doreen's Grandkids Jared Melnyk Dallas Wood Nicholas Ponto Mat Ponto Shanley Bowersock Barrett Bowersock Sidney Dixon Eulogy These past few years not always feeling her best but when asked how she was doing Mom would respond by saying same old same old! Never complaining of the aches, pain or sickness. Now when asked how he’s doing, her great-grandson also responded with same old same old. I guess he’s heard it a few times. While telling family and friends I’ve had a great life and three wonderful children “thank you, like really thank you very much” It truly shows your devout faith and strength, being widowed at 47 taking over a family business that really was not your thing, returning to university so that you could continue as an educator whilst being the rock of our family. Mom’s extended family were those she lived with at Big Knife Villa, man we were lucky and so was she! A staff like no other we are so thankful for the home you provided her and her family. She considered herself spoiled. Once I was told if you’ve had a great love and relationship, you’d never forget them but you would likely have love again and so she did, thanks to you our children had someone to call grandpa. Our children and grandkids are truly the lucky ones. We loved to hear you boast or brag about each and every one of them. Did you know Doreen’s great-granddaughter got 100% on her grade 11 exams! Setting the bar a little high. In the dictionary if you look up the word volunteer it just might say Doreen, well at least it does in ours. Mom worked on many community projects. The most important project Mom worked on was a committee to fight for the opening of the Galahad Health Centre. Hard work and dedication prevailed. She was a member of many groups and charities. To name a few: Library Board, Tutor to many, the U.C.W., a member of the order of Eastern Star for 64 years, Galahad Auxiliary, Secret Santa to many less fortunate, Bar Harbor Camp Board Member and councillor, community enhancement foundation and many more. Doreen's commitment to her community was huge. Everyone between the ages of 25-65 probably had that substitute teacher! Sorry mom your family were not always that pleased! Also known as Grandma D to so many of the community. One of her favourites stated after watching Grandma D pick up litter everywhere she went. That young girl says she has never littered again! You truly had an impact! She also had a slow pitch team named after her “Drunk at Doreen’s“ surprised? So was she. Over many years she had either given a place to sleep to many and fed them all. And did you know there were no ball caps at her table. Except for one daughter. 50 some years of Thursday night poker, (or money Management) with numerous friends and probably down 2$ overall. Mom had many life time friends-like really good friends. And has lost many. You know who you are. They all knew if you went with Doreen you might be the last one to leave or at least until the last dish was done. She had many relatives that she considered best of friends and has kept in touch with most. Along with her many great friends she was blessed to have her late brother Keith and sister-in-law Eva who took her under their wing and never left her on her own. Thank you from the bottoms of hearts, Eva and girls. As you also know mom's life was harder than she would ever admit. While we know she wasn’t perfect and sometimes that verbal filter did slip, we love her and will truly miss her. She is now free from pain and with the many that she loved so dearly. All My Love. Donations in memory of Doreen may be made to the Bethel United Church, Order of the Eastern Star, Big Knife Villa, Galahad Auxiliary, Forestburg Community Enhancement Foundation or a charity of the donor’s choice.

Share Your Memory of
Doreen
Upload Your Memory View All Memories
Be the first to upload a memory!