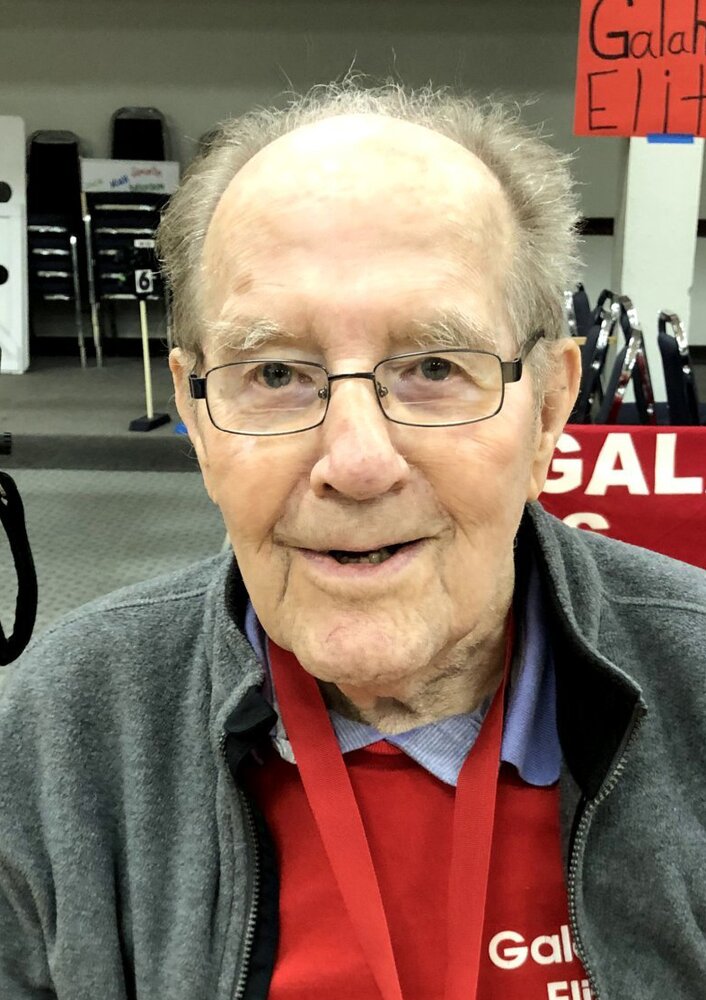 Ross Lorne Banks passed away peacefully in his sleep at Heritage House, Stettler, Alberta on January 9, 2022, at the age of 91. Ross will be sadly missed by his loving children; Linda Bownes, Penny (Bruce) McNabb, Stan (Gina) Banks; son-in-law Ken Goutbeck; grandchildren: Steve (Kim) Bownes, Sheri (Diego) Bownes, Lea (Paul) Rompfer, Bobby (Larissa) McNabb, Kenny (Liz) Banks, Kyra (Dillon) Merritt, Kelly Banks; great grandchildren; Angela, Caitlin, Brendan, Jacob, Hailey, Christopher, Austin, Georgia, Leon, Emiliano, Chase, Drew, Mira, Archer, Dawson, Kasey and numerous other relatives. Ross was predeceased by his wife Kay; parents Bob & Alma Banks; siblings Stanley Banks, Claire Saunders, Allan Banks, Joyce Cave & husband Doug; daughter Lynn Goutbeck, son-in-law Ken Bownes. Ross was born on the homestead near Hazenmore, SK on September 2, 1930, to Bob & Alma Banks. He was the youngest of 5. Together they had adventures playing outdoors, swimming in dugouts and later riding horseback together to the Dixie school 3 ½ miles away from the homestead. Ross met his future wife Kay (Grieser) in 1949 at a ball game in Hazenmore. Ross and Kay were married two years after they met. In the early years they lived on the farm without running water or electricity. On March 10, 1952, they were blessed with beautiful twin girls, Linda Lee and Lynn Marie. The arrival of the twins made a big change in Ross and Kay's lives & living on the farm was sometimes difficult. During the winter months, it was too cold to stay in the farmhouse, so they would move to Calgary during those times where Ross always found work. For a few years he was known at the “Honey Boy” as he delivered Honey Boy bread around the city. Three years later Ross and Kay were blessed with another beautiful daughter, Penny Jean. Shortly after Penny was born, they moved into the hamlet of Hazenmore where Ross worked as an elevator agent for Pioneer Grain in addition to farming. Ten years after Penny was born, the elevator had to be shut down for the day with a huge sign saying, “It’s A Boy”, Stanley Ross had arrived! Ross took an active role in the Hazenmore Community. While he was Mayor, he was credited with the development of the municipal sewage system. We could finally have a flush toilet, yay! Ross and Kay left Hazenmore in the summer of 1967 and moved to the bright lights of Forestburg. Ross had accepted the position of elevator agent for Pioneer Grain. They were so excited to be moving into such a thriving community to raise their growing family. This was a big move for Ross and Kay coming from a village of 120 to the big town of 1,000 residents, it even had a swimming pool. Dad’s family was accepted immediately into the Forestburg community and they made many friends. We can remember all the house parties with card playing, sing songs and dancing. Dad loved curling, he curled in Hazenmore, and continued with the sport in Forestburg winning many grand challenges along the way. Dad was also known for scooting around town in his little old white 1952 Chevy pickup truck delivering CN freight. In 1975, Ross took an area managers job at the Pioneer Grain head office and they moved to Winnipeg. During this time, they became members of the Nomad Trailer club and camped extensively. Ross was the President of the Nomads for several years and they made numerous friends around the campfire. While in Winnipeg, Ross retired and they spent many winter months in Mesa, Arizona. Dad then became involved in crafts, making planter lanterns with colorful lights and salt and pepper shakers out of aluminum beer and pop cans. In 1990, Ross and Kay moved from Winnipeg to Stettler, where they lived for 15 years. Wishing to be closer to family, Ross and Kay moved back to Forestburg in 2005. One of Dad’s favorite events was the annual birthday/anniversary camp out which soon turned out to be a celebration with presents for all. Mom and Dad would always be the first ones to get to the campground and they would be anxiously waiting for us to arrive. They would always greet us with a glass of Dad’s homemade wine. We don’t know what he put in his wine, but it only took one glass, and our cheeks would be rosy, and we would be giggling up a storm. After Mom passed away in 2011, Dad moved into the Forestburg Villa. Everyone can remember Dad in his electric wheelchair and the many incidents he had with it. No doorway was safe with him around, and we think all the ladies were saying “Look out, here comes Ross in his chair!” Who knew an electric wheelchair could cause that much excitement? A few years later, Dad had to move into the long-term care center in Galahad. He was so comfortable there with all the special care he received, and it was a sad day for him when the care center closed, and he had to move to Stettler. It was a huge adjustment for him, and he longed for Galahad to reopen again. Unfortunately, it did not happen, and he passed away peacefully on January 9, 2022. Ross’s family would like to say a special thanks to all the staff at the Big Knife Villa, Galahad Care Centre, and Heritage House in Stettler; to family and friends who stopped by with food, flowers, phone calls & messages; to Fee & Sons for their support and compassion, and an extra special thank you to Randy Howell for playing for Dad. His only request was to have Randy sing “On the Wings of a Dove” for him after he passed. Due to the current health restrictions, a private family service will be held.

Share Your Memory of
Ross
Upload Your Memory View All Memories
Be the first to upload a memory!
Share A Memory