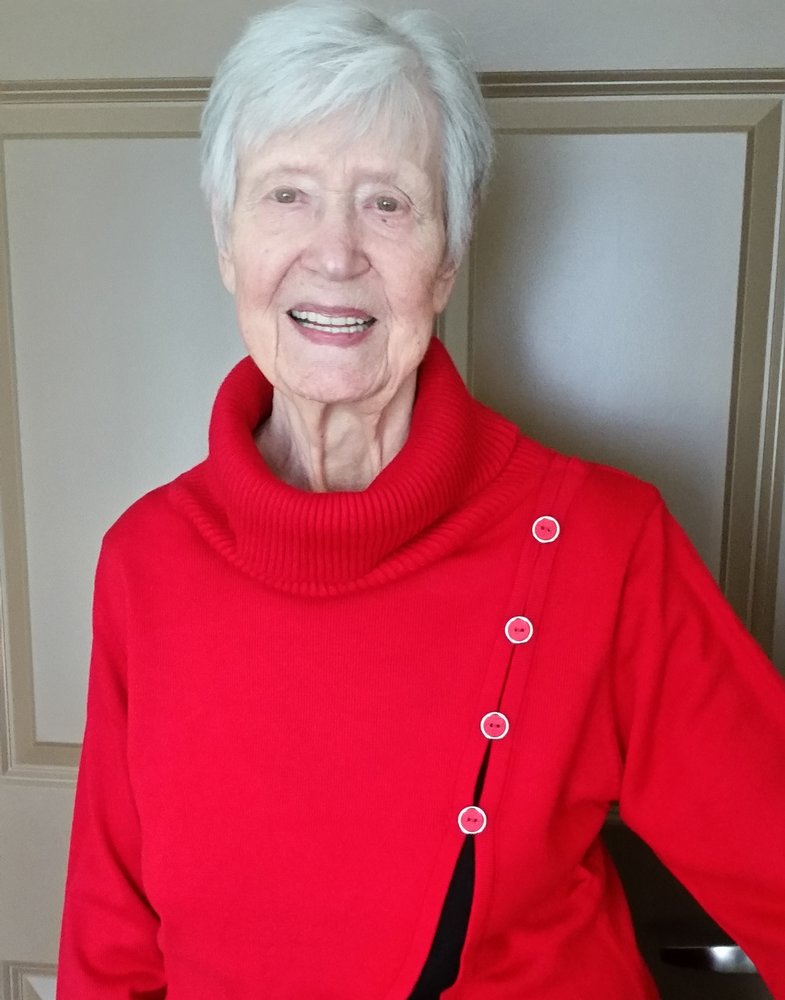 Edna LORRAINE White was born September 6, 1930 at the Royal Alexandra Hospital in Edmonton Alberta to parents John and Jane Rawe. She attended Strome School, and then boarded in Sedgewick Alberta to attend High School. Lorraine attended business college in Edmonton and worked in Viking Hospital, then later for the School Board. After the children were all in school, Lorraine worked at Killam Auxilliary Hospital for over 2 decades as a personal care attendant. In 1950, Lorraine married John White of Killam. The couple set up their family farm northwest of town where they raised 5 children. Lorraine had many creative interests. She loved sewing, decorating, cooking and baking, and also knitting. Lorraine's flower gardens were beautiful, and in later years when flower beds were physically challenging, she gardened in pots on the deck. Lorraine loved music. She sang at church and for many other events. She encouraged her family in any of their musical pursuits. Lorraine had no sister, so she was especially close with her 3 sisters-in-law: Elaine Rawe, Doris Rawe, and Jeanne White. As much as she was able, Lorraine planned several meetings with her 5 girl cousins. She believed that people were more important than things, and cultivated close friendships with church and work colleagues. She would drop what she was doing to have a coffee get-together if any of them called. Lorraine was instrumental in organizing women's ministries in the Sedgewick Nazarene Church, served on the church board for several years, and she presided over the Red Hat Society women's fellowship group in Strome. Lorraine's family was the light of her life. She spoke proudly of each of their accomplishments and enjoyed it when she was able to spend time with them. John and Lorraine left the farm in June of 2008 for the town of Strome. The couple moved to Providence Place in Daysland in 2012. John passed away just over a year later. Due to her declining health, Lorraine moved to Seasons Camrose in 2017. She was admitted to Saint Mary's Hospital on July 3, 2020, and passed away peacefully on September 16, ten days after she celebrated her 90th birthday. Left to mourn her passing are her children: Debbie White, Bill White, Sharon (James) Edgington, Valerie (Dave) Hill, her grandchildren: Amanda White, Angela Edgington, Tony (Kellie) Edgington, Barb (Adam) Hughes, Crystal Edgington, Michael Hill, Melissa (Ryan) Lemay, and 7 great-grandchildren. Lorraine was predeceased by her husband of 62 years, John, her daughter Janet (1984), her brothers Herman Rawe, Orval Rawe, and Virgil Rawe. She will be missed by her surviving cousins and a host of friends. She will be remembered for her legacy of faith and integrity. Due to Alberta Health Regulations, a private family service was held.

Share Your Memory of
Lorraine
Upload Your Memory View All Memories
Be the first to upload a memory!